Always knew we’d be going back with more signatures to negotiate with the Department of Health! But expected at least a mention of funding on the response below!

Please keep the signatures coming, we’re going back with more!! 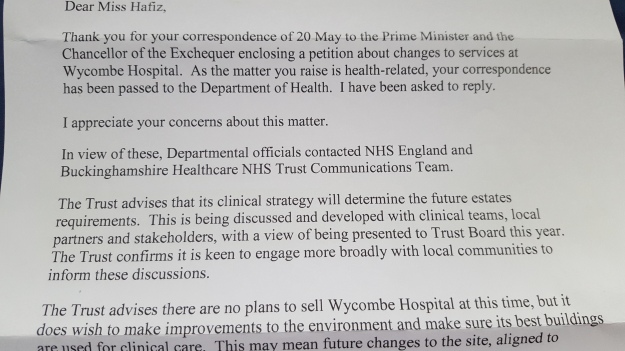 We are also targeting other decision makers! At the moment you can help by writing to your MP with reasons why you want services restored, displaying our poster and taking part in our picture protest #HandsUpForAHandBack. More ways to help on the home page! Contact email = savewycombehospital@live.co.uk 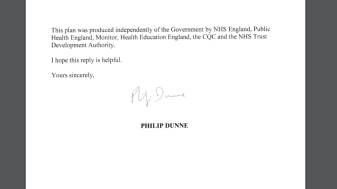 Letter sent to Bucks Free Press on 17th May 2016, published as ‘Write to your MP’

Don’t insult our MP, help him
Recent BFP articles have referred to our MP Steve Baker using the word ‘irresponsible’ in terms of bringing back hospital services to Wycombe. This was met with passionate comments. My response on the High Wycombe Facebook page asked for people to not insult him, as personal comments aren’t going to get us anywhere, they will only divide us and at the moment the community is united in wanting services restored to Wycombe.

Our MP signed a pledge before the last general election, the pledge reads ‘I will strive to get the best NHS provision for Wycombe and surrounds.’ The way to convince him what best provision is, is with your stories, comments and evidence. (Provision means actually having the services we need here!)

Writing in to him with a personal letter containing your reasons why you wish to protect current services and see provision restored would be a way to help him. However it is very important that your stories don’t get lost, please save these. (If you wish you can copy in savewycombehospital@live.co.uk and with your permission these can be forwarded to other local decision makers).

I still feel a holistic review is needed and we are trying to find a body that would be taken seriously to conduct some research here. Many of us hate filling out forms so something that would hold weight would be best. Our hospital downgraded a while ago so I feel the evidence here should be properly analysed, for the benefit of other hospitals now following suit too.  Whilst there is some evidence that some cardiac and stroke services do better when centralised, I am not aware of any evidence that services such as respiratory, overnight children’s services etc. are performing better since moving to Stoke. In fact the director of Public Health stated in her annual report that children and young people from the more disadvantaged areas have higher admission rates to hospital for a range of conditions including chest infections and asthma, and yet much of our resources for asthma are all the way in Stoke Mandeville.

Even the Royal College of Emergency Medicine have been quoted as saying mass centralisation of services isn’t justified clinically. They also have stated that staff shortages aren’t a justification for closing A&Es.

Our CCG don’t hold data before they formed after the Health and Social Care Act in 2012 and don’t seem to have the resources to commission a report.

Service changes don’t always appear to based on evidence. You could ask our MP why certain vascular procedures said to perform better locally are currently being stripped away.
Sadly the Urgent Care Centre he is pushing for, doesn’t appear to offer us anything in the form of additional services. Even Dr Gamell from Chiltern CCG agrees that another name change would cause confusion. I’m glad the words ‘Casualty Unit’ have now stopped being used for the re-organised services but there are in fact some alarming gaps in the report commissioned by Durrow, some which I hope to blog about soon.  An Urgent Care Centre in Wycombe should be next door to an A&E department so that patients can be triaged accordingly.
Our Tower Block could do with a revamp like the college building across the road which is of similar age. If this really is not possible then a building needs to be built on the site before the Tower Block is removed. This is possible if done in stages. The Trust are currently making plans for the site so it is a critical time for us to speak out.

Our MP has previously blogged about whether people would turn out to a protest. Let’s help him by having large numbers in all we do! This will help him to champion our needs in parliament.
Sign our petition if you haven’t already, and join in with #HandsUpForAHandBack by sending in photos with your hand in the ‘stop’ position. These can be as individuals or as groups, and are about us zooming out and continuing to unite the community. We already have regional support (and beyond!) and staff from neighbouring hospitals rooting for us to do well. We have also had support from many celebrities. We can’t not expect challenges, this isn’t an easy fight, but it is an important one. Stay true to your reasons for supporting the campaign. Our campaign isn’t against our MP, let’s help him.